This article has been published in “Pediatria Catalana” in July 2021. Reference:

English translation by the authors. Authorized by editors. Original:http://webs.academia.cat/revistes_elect/view_document.php?tpd=2&i=17228

Introduction.  Ankyloglossia as a cause of neonatal hypernatremic dehydration

Ankyloglossia is a lingual malformation that may cause difficulty in tongue and mandibular movements in the newborn. It results in nipple pain in the mother, weak suction and inadequate milk transfer during breastfeeding. , Ankyloglossia may lead to weight loss and an early cessation of breastfeeding if undetected and untreated.
We report the case of two tongue-tied neonates with breastfeeding difficulties that presented with neonatal hypernatremic dehydration.

Case report. Both infants experienced hypernatremic dehydration, with no signs of infection, at 10 days of life. Both had ankyloglossia, which was untreated in case 1 and undiagnosed in case 2. The undetected ankyloglossia of case 2 was diagnosed a posterior after the identification of case 1. The frenotomy eventually performed in case 1 enabled complete re-lactation, which was not achieved in case 2.

Comments. Breastfeeding difficulties caused by tongue-tie may lead to severe hypernatremic dehydration. It is important to detect
the presence of ankyloglossia in all affected newborns so that symptomatic cases can be closely monitored and treated. Screening for ankyloglossia should be routinely performed at the initial physical examination of all neonates.

Losing up to 10% of birth weight is considered normal in newborn infants. Causes of such weight loss are associated with adaptation, elimination of the excess water of the foetus and insufficient or poor breastfeeding during the first 3 days of life1. The establishment of adequate milk production can take time, although this time span decreases with immediate infant-breast contact as well as frequent feedings and an appropriate latch2. In the first few days postpartum, the mother produces colostrum which is delivered to the infant in small amounts, suited to his stomach capacity and need for nutrients. Lactogenesis II, the copious milk supply, usually starts around day 3 or 4. Pain and maternal stress may hinder milk transfer to the infant, which in turn will hinder milk supply. Both are symptoms and causes of poor positioning on the breast and of an inadequate latch2.

Ankyloglossia, or tongue-tie, can generate difficulties in latching, causing pain to the mother, a weak suction and an inadequate milk transfer, hence limiting the nourishment of the child and leading to weight loss and an early cessation of breastfeeding3-4. It can also produce dental and speech problems, disorders swallowing solids, snoring, apnoea and difficult nasal breathing due to a V-shaped palate in childhood and adulthood3-4.

We present two cases of ankyloglossia that illustrate the possible correlation between feeding difficulties and hypernatremic dehydration.

A first-born daughter with no family history of illness was born at term with an instrumented delivery with an Apgar score of 9-10-10, birth weight of 3300 g and length of 50 cm. After a normal puerperal period, she was discharged at the age of three days with a weight of 2900 g (>10% weight loss). The infant was exclusively breastfed on demand. At 10 days of life, the infant was taken to her paediatrician presenting marked sleepiness. Was referred to the emergency room in a children’s hospital for admission due to dehydration. She weighed 2400 g (having lost 24% of the birth weight) was severely dehydrated, had a poor general condition and was hypoactive yet reactive. Blood tests showed: metabolic acidosis and hypernatremia 176 mmol/L, with no signs of infection. CSF, blood and urine cultures were negative. An intravenous hydration treatment was administered with a good clinical response. Physical and neurological courses were normal. She was discharged home 5 days later with a weight of 2740 g and the diagnoses of maternal hypogalactia and hypernatremic dehydration. Breastfeeding advice was given prior to discharge and at discharge, she was bottle-fed.

The infant was referred to an experienced breastfeeding consultant at 25 days of life. She started to use a milk pump and nipple shields because latching was difficult. She weighed 3070 g; Feeding was evaluated, and the mother was given advice on how to improve positioning. The consultant observed clicking while sucking; nasal obstruction and reddening of the nipple. Type 3 ankyloglossia (Coryllos5) with a submucosal component was observed, and Hazelbaker’s assessment for appearance was 6 (Image 1).

A re-lactation plan was proposed, consisting of frequent milk extraction and a catheter was placed on the breast for feeding. Moreover, the mother was treated with domperidone and was given instructions and support to uphold the correct latch positioning. She achieved complete re-lactation in one month’s time. The infant underwent frenotomy at two months, leading to an improvement in the feeding technique.

Complimentary feeding began at 6 months of age, and the infant displayed good tolerance to solid foods1. At 8 months, the infant presented an adequate development.

A first-born daughter with no family history of illness was born at term after an uneventful pregnancy with an Apgar score of 9-10, a birth weight of 2950 g and a length of 50 cm. After a normal puerperal period, she was discharged three days later with a weight of 2680g  (9,1% weight lost). The infant was exclusively breastfed on demand, and the parents noted her very calm disposition. At 9 days of age, the paediatrician saw her and referred her to the children’s hospital for admission with the diagnosis of dehydration. She weighed 2530 g (14% weight loss from birth), appeared severely dehydrated, had a poor general condition yet was reactive. Blood tests showed metabolic acidosis and hypernatremia 152mmol/L with no signs of infection, and CSF, blood and urine cultures remained negative. An intravenous hydration treatment was administered with a good clinical response. The clinical course, including the neurological course, was normal. There was no mention of breastfeeding or of any health education in her medical report. The infant was discharged at the age of 21 days with bottle feeding.

Twenty-four hours after discharge, at the appointment with the paediatrician and lactation specialist, there was a proposal for re-lactation, which began at the age of 28 days with frequent extraction plus oral domperidone to the mother. The position was corrected frequently, and the mother continued to have nipple discomfort and redness, although there was no cracking and she was progressing appropriately. One month after beginning re-lactation, the infant was almost exclusively breastfed, receiving only one 120-cc bottle of formula at night. This continued until the mother decided to discontinue breastfeeding at 9 months. At 6 months of age, complementary feeding was introduced, which was difficult, due to frequent spitting and swallowing difficulty.

At the age of 4 years, the child was called in for a medical examination following case 1, due to a possible ankyloglossia that had not been detected initially. She had normal development, facial asymmetry, retrognathia, a twisted mouth when opening, a V-shaped palate, a groove on the tongue and rotated lower central incisors. This was a case of type 3 ankyloglossia (Coryllos2) with a submucosal component (Image 2). Speech disabilities were noted by a speech therapist.

The two cases described present a great deal of similarity. Both were treated at the same hospital. The undetected ankyloglossia of case 2 that was diagnosed at a later age, following the presentation of case 1, supports our hypothesis of ankyloglossia as a cause of neonatal hypernatremic dehydration1.

An inadequate breastfeeding technique has been described as a cause of neonatal hypernatremic dehydration. Poor latching, set nursing times, family and social pressures and ankyloglossia have all been associated with breastfeeding failure and neonatal dehydration1,4. Ankyloglossia is associated with pain during nursing, difficult milk extraction even when the technique is correct, and considerable weight loss in the neonate3-4. Upon discharge from the university hospital to which both cases were referred, no causes were cited beyond the mother’s hypogalactia, which both discharge reports mention. Primary hypogalactia occurs rarely in nature. Moreover, milk production resumes with a correct positioning on the breast and appropriate support, as displayed in both cases. Both mothers re-lactated; however, in case 2, re-lactation was not complete despite an appropriate follow-up and support.

The symptoms and signs in the cases described are vastly similar: both were first-time parents with little breastfeeding experience, far from their families and had a keen desire to nurse their infants. Both neonates were diagnosed with hypernatremic dehydration at 10 days of life; both were re-lactated despite the previous experience; and both had ankyloglossia, undiagnosed in case 2 and treated in case 1. The frenotomy performed in case 1 enabled a complete re-lactation that was not achieved in case 2, in which nipple discomfort continued and contributed to the ending of breastfeeding at 9 months. We believe that in both cases, ankyloglossia, which was not detected in case 2 and was identified thanks to its similarity with case 1, as well as the delay in support for breastfeeding, played an important role in the dehydration that these infants suffered.

Tongue-tie was similar in both following Coryllos Calssification5. Case 2 diagnosis was clinic because Hazelbaker test is oriented to infants.

Use diagnosis protocols more actuals like “Test de la lenguita”7 or Bristol Tongue-tie Assessment Tool (BTAT)8 in new-borns or infants and the “Test de la Lengua”9 in infants and older people could allow us to identify in an objective form the ankyloglossia that probably could have a higher prevalence than previously supposed.

We believe that if the delivery hospital has had the Baby Friendly award this situation could not be presented.

In summary, we recommend that ankyloglossia be taken into account as a cause of severe neonatal dehydration due to breastfeeding problems, with a minor and easy surgical solution for the recovery of breastfeeding. Hence, from our point of view, ankyloglossia should be searched for in the initial physical examination in all neonates.

Thanks to Dr Alejandro Allepuz, Dra Natalie Garcia,  Dra Esther Grunnis and DUI Norberto Murillo for their comments and revision. 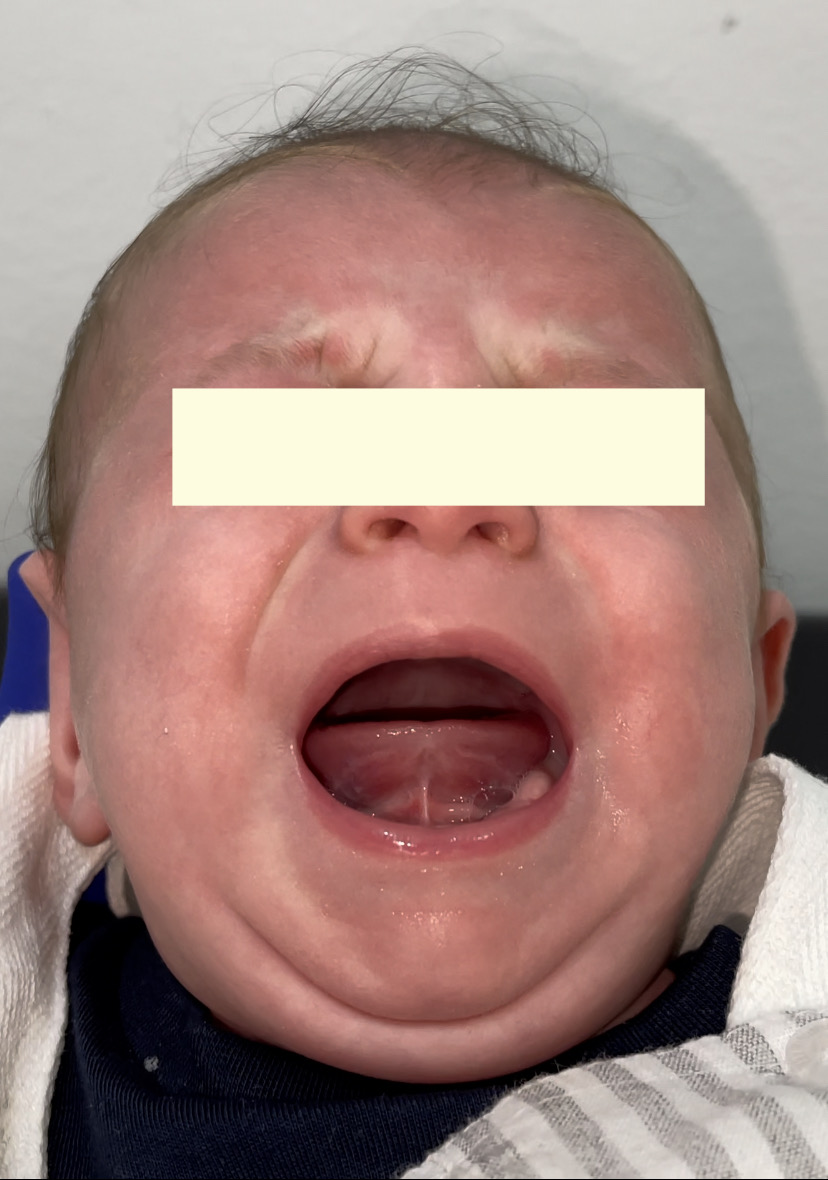